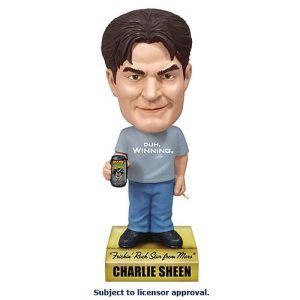 I know I promised myself that I wasn’t going to go down the Charlie Sheen rabbit-hole of crazy shit rants. However, when I came across this image I about fell out of my chair laughing. You know you made it when you become a bobble head. What better accessory to decorate your work space to remind you that, “hey – at least I’m not as loony as Charlie”. Combine that with the fact that you can flick him in the head, well I’m just all in.

Will I purchase said object? No. The reason, I refuse to spend hard earned money on anything that may result in him earning one cent. Does this make me a hypocrite because I am a fellow addict (although I’m in recovery and happily medicated to deal with those bipolar swings)? I could honestly care less. My opinion is that Sheen is a misogynistic, not incredibly talented, unemployed, done lost his kids loser who would still be an asshole if he was sober. That’s my story and I’m sticking to it.

And in truth, I think it would take being extremely high or drunk to even understand most of his rantings. Although I may not have agreed with him when I was out and about using but he would have been a hell of a lot more entertaining. As it stands, I can chuckles about the bobble head and think fondly of when Sheen’s image will be painted on a black velvet canvas and proudly displayed in my single wide.

It isn’t so much that I feel he does a disservice to the field of addiction and recovery. It doesn’t bother me that he has a lot of money and sheep that mindlessly follow him and hang on every word, as if he’s the second coming. The core issue that I have with Charlie Sheen is that he models the worst aspects of human behavior, with antics that I wouldn’t let a toddler get away with, and there is no one telling him (that has the ability to do anything to alter his actions) that what he is doing is simply not acceptable. There is never an excuse for bad manners (or so my Mom taught me) and the reinforcement that he is receiving for his utter lunacy needs to end. Hence, why I initially refused to post or comment anywhere about him. However, it was a bobblehead! I couldn’t resist the temptation.

Added Note: Upon reflection I suppose it isn’t entirely fair to rant & rave and take inventory of another individual. I stand by my opinion & my prayers are with his loved one’s. It is never easy to love someone who suffers with the disease of addiction & I wish them all my very best.

What I’m talking about…